The PromoTown story began in 1991 when its founders embarked on careers in professional sports and entertainment marketing in Detroit, Michigan. After building globally recognized brands and developing award-winning strategies within elite organizations, PromoTown was built upon the foundational principles of excellence, innovation, and value. Home-based in Scottsdale, Arizona, our founders' stories are told in the timeline below: 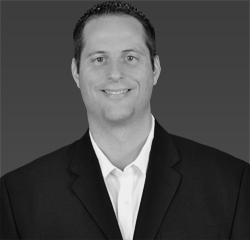 With over 15 years of marketing and promotion experience primarily in profession sports, Kevin draws upon his experience from the fast paced sports marketing business to successfully initiate, operate and fulfill the demands of clients in this ever changing world.

Kevin began his marketing and promotional career in 1994 as an intern for Olympia Entertainment in Detroit, Michigan. Olympia is one of the industry’s most diverse sports and entertainment companies in the country while owning and operating the Fabulous Fox Theatre along with booking and operating Joe Louis Arena, Comerica Park and Cobo Arena. Owned by Ilitch Holdings, Olympia Entertainment is affiliated with the Detroit Red Wings, Detroit Tigers, Little Caesars Pizza and The Hockeytown Café. After successfully obtaining a position within Olympia, Kevin became full time marketing coordinator for the Detroit Red Wings and College Hockey at Joe Louis Arena. His responsibilities included all aspects of marketing including advertising, promotional buying and game presentation duties.

After becoming Marketing Manager for the Red Wings in 1996, Kevin worked as a primary liaison with advertising agency Bozell in Southfield, Michigan. This was the birth for the award winning marketing campaign called Hockeytown, which was launched in Oct 1997. He coordinated the branding and implementation of Hockeytown throughout the Detroit Metro Area and southwest Michigan. Kevin is most proud of contributing to a strong brand such as the Detroit Red Wings and being part of an organization that won Lord Stanley’s Cup in ’97, ‘98 and ‘02.

Kevin also worked won the award winning team for two SILVER CADDYS for the Detroit Red Wings “Stanley” campaign and “College Hockey at The Joe” in both 1999 & 2000. (The CADDY Awards are an annual event sponsored by the Detroit Creative Directors Council that recognizes creative work from Southeastern Michigan's advertising industry)

Kevin began working in the 25 billion dollar promotional merchandising and giveaways industry in August of 2002 as VP of Marketing for Cynergi Sports & Marketing Corporation. With an office in Scottsdale, Arizona, the prospect of continuing his marketing and branding education through advertising specialties while assisting his clients in all aspects of marketing was an enticing challenge.

PromoTown was finally launched in January of 2007 with business partner Jeff Goda. The goal is to create an honest and reliable full service advertising specialties company that goes above and beyond the needs of our clients. Since 2007 PromoTown has serviced over 300 clients ranging from fortune 500 companies, professional sports teams, colleges and universities to small businesses.